Unlike many global brands that take a thoughtful and even often philosophical approach to their naming and logo design, the Adidas story seems more “banal”. After all, the name of the German trademark is only a derivative of the name of its founder Adolf (Adi) Dassler. However, the history of the brand’s visual image is not so simple.

Being a real sports fan, Adi Dassler began to develop the first models of sports shoes immediately after returning from the First World War. But it wasn’t until 1924 that Adi and his brother Rudolf (Rudy) officially registered the Dassler Brothers Shoe Factory (Gebrüder Dassler). A year later, Adolf invented and sewed the world’s first football boots with spikes, which turned out to be so comfortable that they quickly became in demand.

As an advertisement for their products, the brothers decided to rely on cooperation with athletes. Athletes begin to perform in Dassler shoes already at the 1928 Summer Olympics in Amsterdam. And at the 1936 Olympics in Berlin, American runner Jesse Owens won four gold medals in their shoes and set five world records.

Dassler’s signature two stripes appear on Owens spikes for the first time, designed to better hold the structure together and symbolize two brothers.

The Second World War made probably the most significant adjustments to the development of the family business and the relationship between the brothers. The Dassler factory was nationalized, and the brothers were sent to the front. And if Adolf was returned a year later to the factory to produce training shoes for German soldiers, then Rudy was not lucky to be in the American zone of occupation, and then in a prisoner of war camp.

Resentment against his brother for his unwillingness to help get out of captivity did not leave Rudolf until the end of his life. Therefore, after the end of the war and the death of their father in 1947, the brothers finally quarreled and divided production. Adolf named his company Adidas, and Rudolf named Ruda, and a few months later both renamed their companies Adidas and Puma.

Subsequently, these two firms became irreconcilable competitors, at least in Germany. On the other hand, it served as one of the main incentives for the development of the entire industry.

The first Adidas logo appeared in 1949. And it was an image of a boot with three stripes, which is held by deliberately elongated remote elements of the letters “d” in the name Adidas. And on top in the form of a semicircle is the name of Adolf Dassler.

It should be noted that the text part of the logo reflects the type constructivism popular at that time in Germany. Subsequently, it would become one of the most prominent typographic trends and would be strongly associated with “Germanness” through fonts such as Futura and the Bauhaus (1919-1933) experiments with geometric grotesques. From here, the legs of the lowercase writing of all the letters of the logo also grow.

Few people know that at that time there was a Finnish sportswear brand Karhu, which also used three stripes in the design of its products. But Adolf Dassler managed to negotiate and buy three stripes from the Finns for $ 1,800 (in today’s equivalent) and two bottles of whiskey. 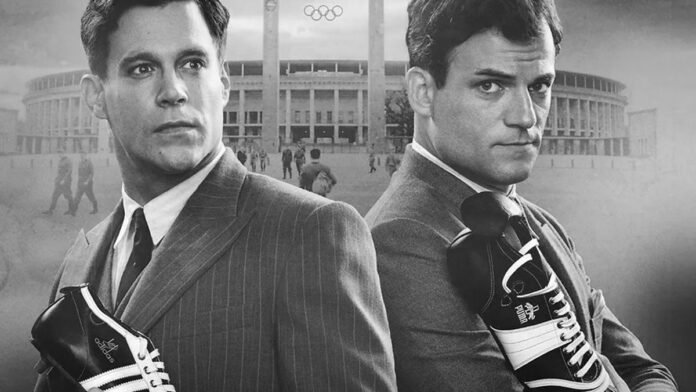 Since 1952, Adidas began to produce other products: sports bags and tracksuits with three stripes along the sleeves. Thus, the three stripes become the main brand motif.

In the early 1970s, Adidas decided it needed a global rebrand and created a dynamic logo that would characterize the brand as more diverse and more than just quality athletic shoes. The presentation of the new redesign also coincided with the 1972 Olympics in Munich.

The new company logo was a shamrock with three corporate stripes in the lower half of the emblem. Three sheets depicted a stylized sweep of the world map with three continents, on which the company’s products were sold at that moment. The first sheet is North and South America, the middle sheet is Europe and Africa, and the third sheet is Asia.

Three horizontal stripes symbolized diversity. This logo is still in use today. Only now they brand the Adidas Originals collection. It was through this rebranding that the brand moved beyond sportswear and became part of everyday streetwear.

Now advertising campaigns began to use images not only of athletes, but also, for example, musicians such as David Bowie or Run DMC.

After the death of Adolf Dassler in 1978, Adidas fell on extremely difficult times. A series of leadership changes begins, which is why the development of the company at the brand level has stalled. This happened against the background of growth in sales of the main competitors – Nike and Reebok.

The rapid development of shoe technology and design aesthetics in the 1990s meant it was time for Adidas to renew its identity once again and save the company from bankruptcy.

The rapid development of shoe technology and design aesthetics in the 1990s meant it was time for Adidas to renew its identity once again and save the company from bankruptcy.

In the early 90s, following the success of their ultra-futuristic ZX shoe series, Adidas introduced a new line of professional gear, Adidas Equipment, which was designed “to meet the specific needs of professional athletes in various situations.”

The new logo still retains the branded three stripes, only in this version, thanks to the slope, they also turned into a “mountain” – a symbol of overcoming the difficulties and challenges that athletes face. Despite the subsequent wave of criticism that called the new logo too simple and boring, seven years later in 1997 it becomes the main logo of the entire Adidas company.

Unlike its main competitor Nike, Adidas has never had a main slogan comparable in strength to “Just do it” throughout its existence. In 2004, perhaps the most successful advertising campaign with the slogan “Impossible is nothing” was released, in which famous athletes of the time, such as David Beckham and Muhammad Ali, took part. However, this slogan failed to become the slogan of the entire brand.

During the 2000s, Adidas made several minor changes to its brand, formally establishing Adidas Originals in 2001 and phasing out the Equipment logo. The corporate identity of the brand has been simplified to a classic text logo with three horizontal stripes.

Corporate branding aside, the latest iteration of the logo is the Adidas Style, which depicts a circle intersected by three claw-like stripes.

The Style division controls many of Adidas’ more fashion-oriented lines, such as the Y-3 collaboration line designed by Yoji Yamamoto and the Adidas SLVR line. And although it has been introduced in some retail stores and other projects, this version is not used as often as other brand logos.

Thus, there are actually four variants of the Adidas logo now: one head logo and three direction logos, some of which also have their own logos that are not tied to the general company graphics. The history of development over the years can be viewed at logolook.net.

On the one hand, it can be argued that versatility has allowed the three-stripes brand to make itself known in a variety of directions – from sports to music, fashion and art. The Adidas brand has been adopted by many subcultures such as hip-hop, graffiti, skateboarding and so on.

At the same time, the company continued to create cutting-edge, high-performance shoes, so it certainly became more and more difficult for it to keep all these areas within one logo – even though the shamrock logo was once designed to convey product diversity in Adidas.

So the multi-pronged approach to brand identity—creating different logos for different purposes—is largely based on the original meaning of the three stripes in the 1972 logo.

In the same way that this functional and practical design element eventually became a global corporate identity: the three stripes have been adapted in one way or another and are present in the identities of all directions.

It’s practical, flexible, versatile branding. Whenever you see sportswear, sneakers or equipment with three stripes, belonging to a single brand is instantly read.

On the other hand, if you ask ordinary people to choose the main one from four logos, and even more so to explain the meaning of each, the results are unlikely to coincide with reality. After all, the company itself is extremely illogical in branding its products and stores.

Even products from the same collection can have completely different logos. Just like in the design of shops and offices, several logos can be placed simultaneously. Or products of one direction (for example, Adidas Originals) can be sold in stores with a sign of another direction (Adidas Performance).

So in the end, the existence of several logos at the same time introduces quite a lot of difficulties for both the people implementing the design on the ground and for the consumers.

How to Get on Top of Google Search?

When Choosing a Wedding Photographer, Consider These Factors